This is an Indo-Pacific lionfish (from the genus Pterois) from one of my 2017 dives off of Fiji’s coral coast.  Even though I don’t have a red filter on my GoPro and I’m using natural light at about 60 feet down, it’s I think the video conveys the beauty of the animal as it hovers in perfect balance, display its’ delicate fins in a threat display as I approach it.

If you’re not familiar with the lionfish, it’s a predatory reef fish and on those delicate fins are spines which can be used defensively to deliver a painful sting.  As stated by divemaster Mike Ryan to Erin Spencer in National Geographic:

“It won’t kill you, but it’ll make you wish you were dead”.

You’ll notice all the other little fish on the wreck I’m diving on – these make up the lionfish’s diet. They have jaws like a snapping turtle and when they drift up to prey, their lightning fast strike, sans venom, makes quick work of their prey.

They’re not apex predators, however. Not by a longshot.  As secondary consumers on the trophic pyramid, they are eaten by groupers, sharks, eels, and all manner of other fish.  In their native environment – which runs from the Red Sea to the South Pacific, they are in balance with the rest of the marine world.

But therein lies the problem.  Lionfish have escaped their home, bypassed the Great Filter that are the cold oceans of the poles, and strictly by human stupidity, and they are now where they are not supposed to be. It’s a late score on the field of play that is the Columbian Exchange.

In 1995, someone who lived in near my hometown of Palm Beach, FL had a pet lionfish, and for whatever reason, they could no longer keep it.  Maybe the upkeep of a salt water aquarium was too much.  Maybe it got too big for the tank.  Maybe they died and the executor of their will was like “I’m not going to be responsible for this feathery sting-beast”, but for whatever reason, some lionfish were introduced into waters of South Florida’s Gold Coast.

And because the sharks, grouper, eels, and other fish had no idea that the lionfish was a prey animal, they left it alone. Or they were intimated by the flowing fins and large size of the lionfish and thought it to be too much trouble.  That’s generally how nature goes.  Millions of years of evolution and instinct cannnot simply be overridden in day.

The lionfish, however, has two genetic imperatives: mate and kill.  Predators…  They know they are predators.   There’s a certain cockiness to them. Call it “killer instinct”.

So the lionfish started doing both.  Mating and killing.  See that 2015 map?  In 20 years they have colonized the entire Caribbean/Gulf Stream regions.  And they’re laying waste to the native fish populations of the area.  With no natural predators, and abundances of tasty fish, plus warm ocean water that stimulates the lionfish into mating, it’s a worst-case scenario if you’re trying to manage an invasive species.

What to do about it?  There’s only one way: kill them them all!

This is the one instance where I will say: killing marine life is 100% ethical, OK, and must be done.  Lionfish in the Caribbean, off the coast of Mexico, and along America’s Gulf Stream coast MUST BE ERADICATED.

Now, I’ve heard tell of stories in Belize and Curaçao where the local shark populations are being trained to eat lionfish (to the point where sharks recognize the sound of a speared lionfish and the catch must be released immediately lest the shark get all up in your grill) and where locals are engaging in lionfish hunts.

They do that in Florida too – from the good folks at REEF, the Reef Environmental Education Foundation:

You can get the full skinny HERE, but basically, you get yourself a lionfish catching kit, be a certified diver, and then follow the rules and catch as many lionfish as possible.

And they’re not going to waste.  Lionfish is starting to make the table in Florida restaurants and home kitchens.   Even Whole Foods is selling it.  And that’s where I come in!

Now, if I still lived in South Florida, I would be all about the derbies, but in Arizona, our invasive species of are of a less edible variety (looking at you, Felis domesticus), but while on vacation, I will totally enjoy the spoils of the hunt.

We wound up getting 8 fillets (that’s four fish), and at least at the Whole Foods in West Palm Beach on Palm Beach Lakes Blvd, they will clean your fish, and cook it – my dad and I got ours cajun style, my mom got hers lemon-pepper.

Given the other choices in that display case (snapper, pompano, etc.), how does the lionfish taste?  In a word?  Delicious.

Here I’ve paired it with collard greens and cauliflower au gratin – all the sides came from Whole Foods – but a side of rice and maquechoux?  That would have been the absolute perfect compliment.  The fish flavor is closest to snapper, and the texture, while not super-flaky, still only requires a fork to eat it.   I wish I had more access to it, because man, I think this would be a good fish for a fish n’ chips, sulc (a Czech dish), or a fish soup.  It would also make the most epic Stargazy Pie you’ve ever seen. 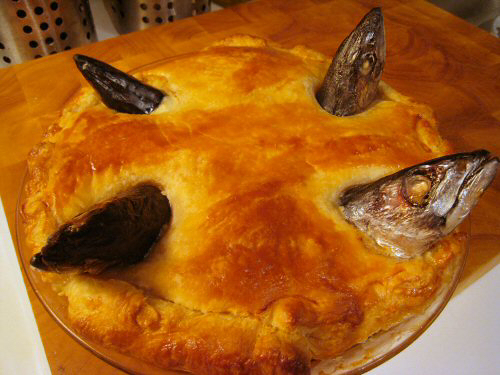 Stargazy Pie is a wonderfully weird dish.As to the ethics of it, yes, something is dying, but the lionfish simply isn’t supposed to be here, and it’s because of human ignorance that it came to the Americas.  It’s not the their fault, but to quote the Ramones:  someone has to pay the price.   The fishery is 100% sustainable, there’s zero bycatch, and it solves a real problem.

And for every one eaten, that’s one less snapper, grouper, or other native fish on a plate.   It’s a win-win-win for the seafood lover in you.

But if you want to see lionfish in their native habitat, book a trip to the Waidroka Bay Resort in Fiji. If you want to see one on your plate, come to Florida and find a local restaurant that serves it (or pop into a Whole Foods and check out the seafood counter).   You can cook it at home too!  REEF offers a lionfish cookbook. Check it out HERE.

You’ll be happy you did!

More About The Klute

Connect with The Klute